Otter, We Hardly Knew Ya 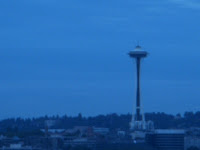 We just returned from a lovely 5-day jaunt to Seattle (don't you love spouse's conferences?) where JR and I tried to see all the sights. On our first outing, to Pike Place Market, of course, we found a book called "Larry Gets Lost in Seattle", which became our guide. So we managed to see a Seattle Mariners game (they lost to the Angels, but the score was 2-1, so the game was quite respectable). We took a ferry to Bainbridge Island. We visited the main library, the Pacific Science Center, Chinatown, Pioneer Square, the neighborhood around University of Washington (my husband's idea), the Space Needle, the Children's Museum (made me miss our Please Touch Museum at home) and, one of the surprising highlights - the locks and salmon ladder at Ballard (Chittenden Locks). Earlier that day, JR and I had made a deal - he could buy one toy, at the end of the day, "if he was good" (which of course, he was). So there we were, at the end of the day, in the visitors center at the locks, which has a (thankfully) very small gift shop. And that was where we met Otter.

An interesting point about JR's choices of stuffed animals -- the ones he truly bonds with are small. As adults, I think we have this tendency to believe that bigger is better - so friends and relatives have gifted JR with a host full of giant Elmos and life size monkeys and standard issue teddy bears. Yet the animals he has named and played with and slept next to tend to be very small. Like Otter. He was about 3" long, a plush brown sea otter with a little tan face. JR named him Otter and they becamse fast friends. He introduced Otter to all the interesting facts of life - what cars are, and Daddies, and dinner and TV and a bed.

Yesterday morning, departure day, the last I saw of Otter, he was being placed in Daddy's pocket on our way down to breakfast at the hotel (they served Japanese breakfast, which JR's dad loves). He was going into Dad's pocket because JR's pocket was too small. After breakfast we had some time in the room where I finished packing and took care of some email while JR watched PBS Kids and hung out under the covers. Dad was probably reading the newspaper.

Halfway to the airport, a plaintive JR asks "Where's Otter?" A brief discussion ensued and the parents determined that Otter must not have made it out of the hotel room. The day went on.

Rental car was returned, bags were checked, snacks were purchased, lunch was eaten and we boarded the plane home. JR slept for most of the flight, a miracle in and of itself. I had time to read my novel. We arrived home, ate PB&J sandwiches and got ready for bed.

Which is the precise moment that the loss of Otter hit JR like a ton of bricks. Much wailing and gnashing of teeth. The call to the hotel (no, Otter was not found). More wailing. Thinking I had calmed him down, I went up to bed. The wailing began again. Dad tried. I tried. Finally, an exhausted, devastated JR fell asleep in our bed - and I went down and slept in his bed because if there is one thing we have learned about our 6 y.o. - he may still need his stuffed animals and he may still cry his little heart out with disappointment, but he is too big and too restless to allow anyone else to get any sleep should they happen to be in the same bed.

North, south, east, west - home is best. Sorry, Otter, that your sojourn with our family was so brief.
Posted by JR's Mom at 6:01 AM