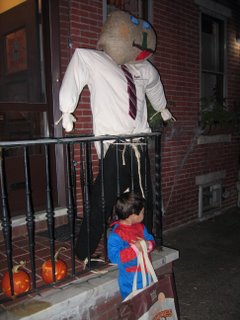 Our third Halloween has come and gone. Oh for the days when mom and dad got to pick the costume. The first year I found this adorable fireman jacket and put it on him. Last year, knowing of his obsession with Bob the Builder, I found a BTB outfit and he was thrilled.

This year, JR taught us that it is the toddlers prerogative to change his mind. Again and again. Luckily, we have inherited a stash of hand-me-down costumes from a family of boys, so he had a supply to choose from.

For months, he'd been saying he wanted to be Thomas the Tank Engine, and that held up through his school Halloween party on Friday. Then Saturday, on our way to the local playground Halloween party, he asked to take the bumblebee costume (but then he wouldn't put it on and went costumeless). His little friend, a very fetching Hermione, told him that he needed a costume to swat at the pinata, but JR just announced he didn't need to hit the pinata (he just bided his time until the candy came crashing down and then scavenged in the mix with the rest of the kids, somewhat less encumbered by his lack of costume).

Yesterday, he started the day by saying he wanted to be Spiderman, but when it was time to put the costume on, had switched to Batman. The Batman costume turned out to be a bit on the big side, so he switched back to Spiderman (sans scary hooded headpiece) and that is how he trick or treated.

We had lots of kids visiting our house for treats and the participating neighbors were all outside chatting. Some of the carved Jack-o-Lanterns were truly amazing. It was just the way I remember Halloween from my childhood (although with fewer home-made costumes). JR had a grand time trick or treating, but refused to wear his costume over to his grandmother's house - so she had to just imagine how cute he was.
Posted by JR's Mom at 10:34 AM