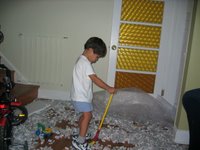 Every year, we have to update the Consulate of Kazakhstan on JR. Here is this year's report

JR is a bright, healthy, energetic toddler who is deeply loved by his parents and everyone who meets him. Just today one of the teachers from his daycare program told us that “He is charming his way into my heart.”

His medical health is very good. He is in the 90th percentile for height and weight (at his last check-up, in September, he was 40” tall and weighed 35 lbs.) His only medical issue is occasional mild asthma, primarily triggered by colds and successfully treated with medicine. His pediatrician has been particularly impressed by his obvious intelligence and his clear attachment to his parents. He was potty-trained at 3 years and 2 months of age.

He attends daycare 4 days a week. The teachers are generally pleased with his behavior (he helps with clean-up, shares toys wells, and participates in all the programmed activities). They also regularly remark on how bright he is. He is always the first one to volunteer the answer to the teacher’s questions. He knows his alphabet, can count to more than 20, and can recognize his name in print, as well as the names of many of his classmates. Our house is filled with his art projects from “school.” He will soon be moving from the nursery school to a preschool program, a few months earlier than originally planned, because the Director of the preschool feels that he is ready to move to the program with the older children.

His most marked abilities, however, are in athletics. He has excellent motor skills. He can throw balls (baseballs, footballs, tennis balls, etc.) for quite a distance, and with accurate aim. He can hit baseballs with a bat. He likes nothing better than to “play baseball” with his father. He would happily spend hours throwing balls back and forth. Now that football season has started, his passion for baseball has been somewhat replaced by a passion for football. To encourage Joseph’s athletic abilities, we have registered him for a tumbling/gymnastics class on Saturdays (designed for children ages 3-5 years). We also will sign him up for tee-ball (baseball for very young children) in the spring.

He is a good eater (his favorite foods are macaroni, olives, any type of fruit, and of course, ice cream). We read to him regularly, and he has many favorite books. In addition to playing ball, he enjoys doing puzzles and constructing buildings with blocks, Lincoln Logs, and Tinker Toys. He likes to pretend he is “Bob the Builder” (a TV character from a children’s show) and use tools to fix our house. He likes to make up funny stories and jokes.

He has many friends in the neighborhood and at school. We are in touch with several families in the area who also adopted children from Delphin Baby House and we get together with them from time to time. One of the families even hosted a Naurez party, which we all attended. In addition to his friends from Kazakhstan, he has good friends who were adopted from China, Viet Nam and the Ukraine.

He has also developed very close relationships with his first cousins on his father’s side. He is particularly enamored of his cousin A, who is 7-years-old. JR likes to do whatever A is doing and especially likes to play baseball with him. We see his cousins several times a month and we spent a week vacationing together with them in a NJ beach resort). JR also traveled with his mother and father to Denver Colorado for a short vacation in September. His favorite part of that trip was climbing the mountains at Rocky Mountain National Park.

We feel privileged and blessed to have Joseph in our lives.
Posted by JR's Mom at 12:47 PM